A few months ago, I found visualpatterns.org and I knew it would be useful as I started linear functions with my 8th grade students.

Here's how I've used it.

First, we learned what functions are and practiced completing function tables given a function.  My students are weak in computational skills, so that was important to tackle before we got too deep into  linear functions.  Then, we used the steepness of stairs to explore the concept of slope.  Once we'd learned to find slope from a graph, table, two ordered pairs, and word problems, I was ready to introduce linear functions.

I had students start with pattern #2.  They built the pattern with unifix cubes and completed a recording sheet.  The recording sheet asked them to find the number of cubes used in the first six terms of the pattern and then it jumped to the 15th term. 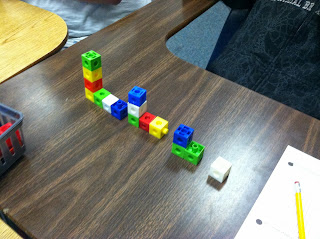 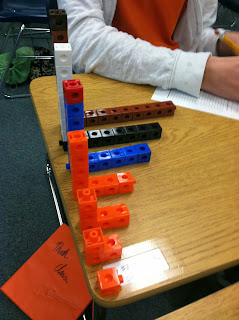 As I circulated around the room, I saw some students were building to get to the 15th term while others noticed the numerical pattern and chose to complete a table.  I also saw several students who were off by one or two blocks on their answer.  One student had written 30 (the correct answer is 29).  We had a rich discussion which I'll try to capture here.
T: So why is the 15th term made with 30 blocks?
S: Because it's 15 and 15. (She gestures horizontally and vertically.)
T: Can you build it and show me?
S: Like this.  Student builds an L shape with approximately 12 blocks on the horizontal and 7 on the vertical.
T: Would you explain how you made that?
S: I just added some blocks on.
T: Why did you add that amount of blocks?
S: I don't know; I just added some.
T: OK.  Did you notice a pattern happening when you built the first four objects?
S: You put one on each end.
T: Could you try that here to get to the 15th term?
S: Yeah.  Student builds correct 15th term as we count out loud which term number she is on.
T: So, how many blocks did you use?
S: 30.  (Student answers immediately without counting the blocks used.)
T: Could you count them?
S: But there's 30.
T: Please count them so we can be sure.
S: OK.  1, 2, 3, ..., 29.  That's not right.  1, 2, 3, ..., 29.  Hmm.  Student picks up another block and adds it to her construction.  30!  There's supposed to be 15 and 15.
T: Why are you changing what you built?
S: Because it's wrong.
T:  Before we decide that it's wrong, let's look at a smaller object.  Look at the third term.  How many are there?
S: 6. (immediately)  Oh, no.  There are 5.
At this point, the student sitting across from her can't take it any longer.  He interjects his observations.
S2: Look, if you take the L apart, there are two equal lengths with the one block in the corner as a connector.  Student 2 models what he's describing with the blocks by taking the L apart and showing Student 1 that the sides are equivalent if you remove the block in the corner.
S1: OK, but why isn't it 30?
S2: Because you have to have that corner piece, too.
T: Have you noticed any mathematical pattern in the first few terms?
S1: It's adding 2 each time.
T: And do you notice anything about the kinds of numbers that are in the table?
S1: They're all odd.  So 30 couldn't be on the list.

Our conversation actually went on a bit more, but I wanted to capture this part because I thought it was really good.  I was a bit shocked at how difficult this process was for Student 1.  I was also pleased by Student 2's observations as I suspect he'll do well as we make the connection to slope and y-intercept next week.  I think next week I'm going to ask Student 1 to use a new color for each term so she can see clearly what she has added in each step.

As we wrapped up this pattern, students graphed their data points.  I asked them what they noticed.
No one said, "the slope is 2" but they'll certainly catch on to that next week as we examine a few more patterns and write down our observations.

And a second version I used with Algebra I:

Thanks to Fawn for offering such a helpful resource!
Posted by Kathryn at 7:34 AM