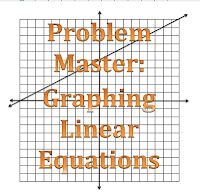 A few months ago, I did a "Problem Master" activity with my Algebra I class focusing on probability.  They handled the activity really well and wanted to do it again.  I threw together this activity last night in one of those I-hate-tomorrow's-lesson-plan-and-need-something-that-will-work moments.  Our schedule has been modified for the past two weeks due to state testing, so the kids are unsettled and this got them moving around and talking in a productive way.

The steps are simple:
Management tips:
If you hung around this long, you deserve a freebie.  Here are the equations we practiced today.  They are all horizontal, vertical, or in slope-intercept form.  I loved overhearing discussions of "HOY VUX," slope, intercepts, and the like.


Mathematically yours,
Miss B
Posted by Kathryn at 4:12 PM No comments:

Email ThisBlogThis!Share to TwitterShare to FacebookShare to Pinterest
Labels: Algebra I

Graphs of Vertical and Horizontal Lines

It's the most dreaded time of the year: state testing is this week.  Two days down, two days to go and I'm SO done with testing!  The kids are even more ready to be done than I am.  Today I taught a lesson on horizontal and vertical lines (which ones are x= and which ones are y=) after the test.  We'd already introduced the idea previously with a HOY VUX foldable.  This is my first year using that acronym, so thanks to the math blogging world for making me aware of it.  Based on the classwork my students completed today, only about half of the class really grasped what we were doing.

Tomorrow we're going to go over the classwork and look at some additional graphs.  Then I'm assigning a project inspired a bit by alphabet slope and a bit by a picture graphing project.

Students will have to graph their three initials in block letters on graph paper.  Then, they'll need to identify the equations they used.  Most will be horizontal or vertical, but they will likely get at least one or two diagonal lines in the mix, depending on what their initials are. 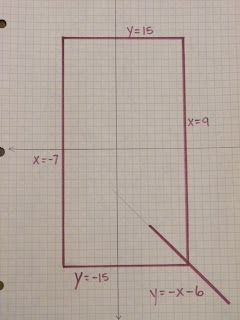 I'm going to partner students off with someone who shares an initial so they can get some support on the first letter they work on and then complete the other two independently. We'll have almost all of the alphabet covered, save about five letters, so I think I'll post one example of each letter as a math alphabet.  Early finishers can make the other letters for us.

What genius ideas do you have for teaching linear equations?  I would love to hear from you.

Mathematically yours,
Miss B

Posted by Kathryn at 5:07 PM No comments: