So, I'm writing/editing NBCT portfolio entries today and I need a break from precision writing.  These next three weeks are going to fly by and I'm somewhat fearful that I'm not going to finish getting everything together the way in needs to be.

I thought I would tell you about a left side assignment gallery walk I did about a week ago.  First of all, you should know that I do Interactive Notebooks with the right side as teacher input and the left side as student output.  The thing is, I've just started ISNs this year and I had a hard time giving complete control over to kids for the left side, especially since I didn't know exactly how ISNs would pan out.  I love ISNs and I still think it's great that I wrote a list of LSA choices last summer, but  I think a few of my assignments are a little too "easy" and that I need to somehow make them more similar in the level of effort required before next year (or at least put some in a category that indicates they're going to earn at most an 80% if they're done as written).

Anyway, I gave complete control over for an LSA on simplifying radical expressions.  It was mostly successful because it was their last assignment in that unit, so they had the big picture ideas down.

When students brought their work in, we did a mini gallery walk in which they spent five minutes walking around and reading other students' books.  Then I asked students to nominate someone who did work that we should all see.  Nominees were invited to the document camera to share.  Kids are SO eager to brag on their classmates!  What made this valuable was that I wasn't the one initiating the praise; I also hadn't graded the assignments yet, so we saw what the students thought was quality work.  They selected the songs (including two versions of Katy Perry's Dark Horse rewritten as rules for simplifying radicals), the colorful pages, the comics, and other creative work.  I don't think anyone chose to highlight a page that was a plain problem set.

I feel like when I start doing more LSAs next year that offer choice, I'm going to absolutely build in time to do this at the beginning of the year so that students can see exemplary work.

I only have one picture right now, but I'll get some more.  Flashcards were popular choices; this student chose to write questions that we ask ourselves while solving on the flashcards.  She wrote answers and explanations on the back.  The orange is a pocket meant to hold them. 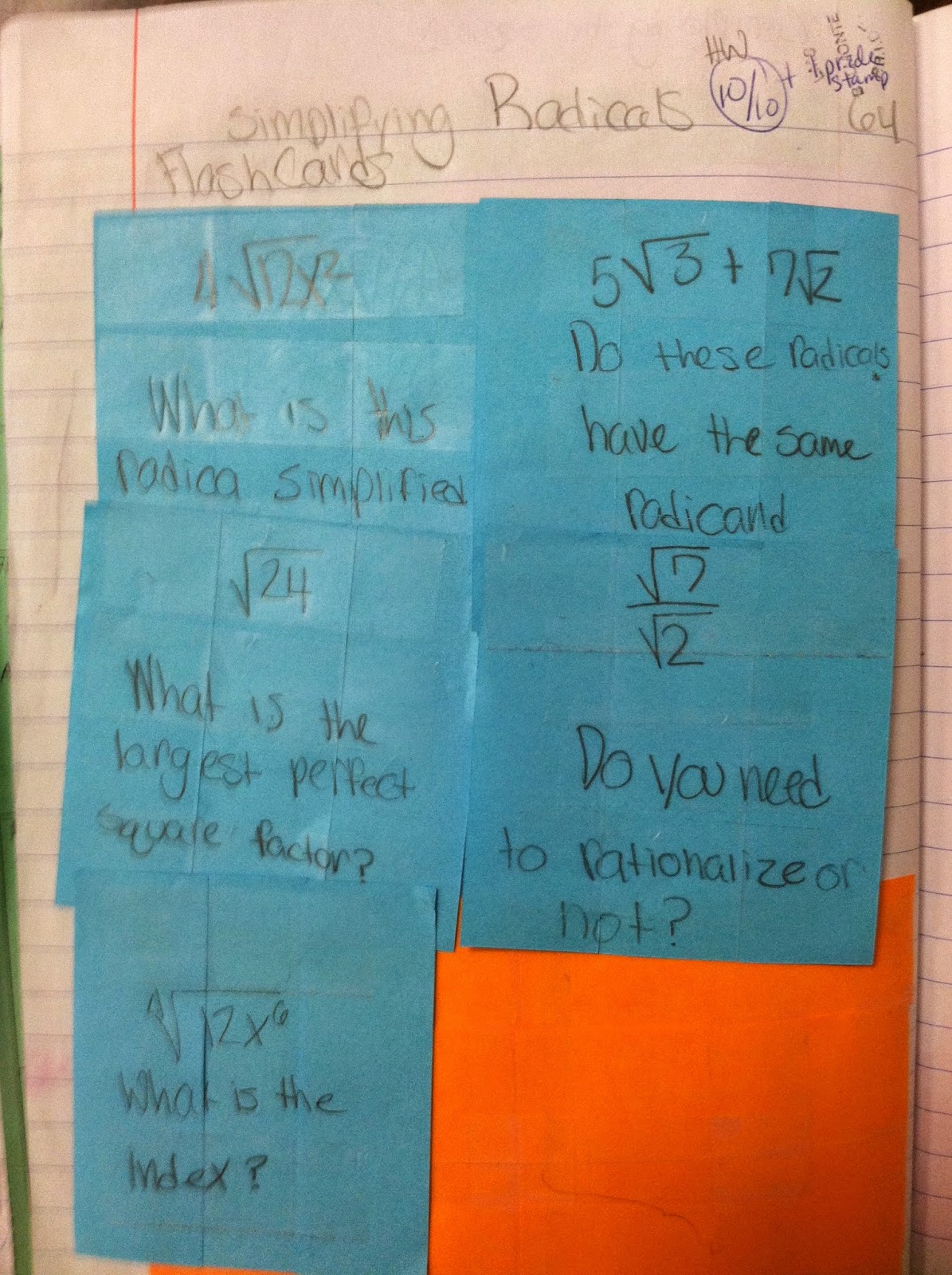 How do you help students grow?

Mathematically yours,
Miss B

Posted by Kathryn at 8:10 AM No comments:

Not a math lesson...

...but a French lesson instead.  (Math teachers, see if you can adapt this activity to your classroom.)

I am primarily a math teacher, but this year I was afforded the great opportunity to also teach French I for one period a day.  It's really been a dream come true, though I can't say that I have everything quite figured out yet.  There are definitely some things that I need to do more/better/differently to get my French class to be more like I want it to be.  Having never student taught in French either, I was really green at the beginning of the year and finally feel like I have a decent handle on what my expectations should be.  In some areas, I've been way too lenient, and in others, I've been way too strict.

Anyway, today's lesson was totally last minute and not something I'd planned out with any great thought.  I had introduced some new verbs at the end of last week and I wanted to practice them without a worksheet.  I wanted to play a game, but I have 26 students in the class and most games leave lots of students to not fully participate.  I also wanted to talk less than I normally end up talking.  So, I made my students play Pictionary with a twist.  It went like this:

1. I wrote up all of the verbs they've seen so far, one per index card.
2. I divided the class into two equal teams.
3. I called two kids to the front to draw the verb on the whiteboard that I showed them from one of my cards. Several times, kids returned to their seats to look up the definition.  Perfect; that shows they're trying to learn!
4. The kids in the audience had to call out the verb they thought was being drawn.  Any speaking in English meant disqualification for that team for that round.  This happened on the first round, and not again afterwards.
5. The first kid to get the correct verb got to roll a large die (from Dollar Tree) that I have re-labeled with the six subject pronoun groups. 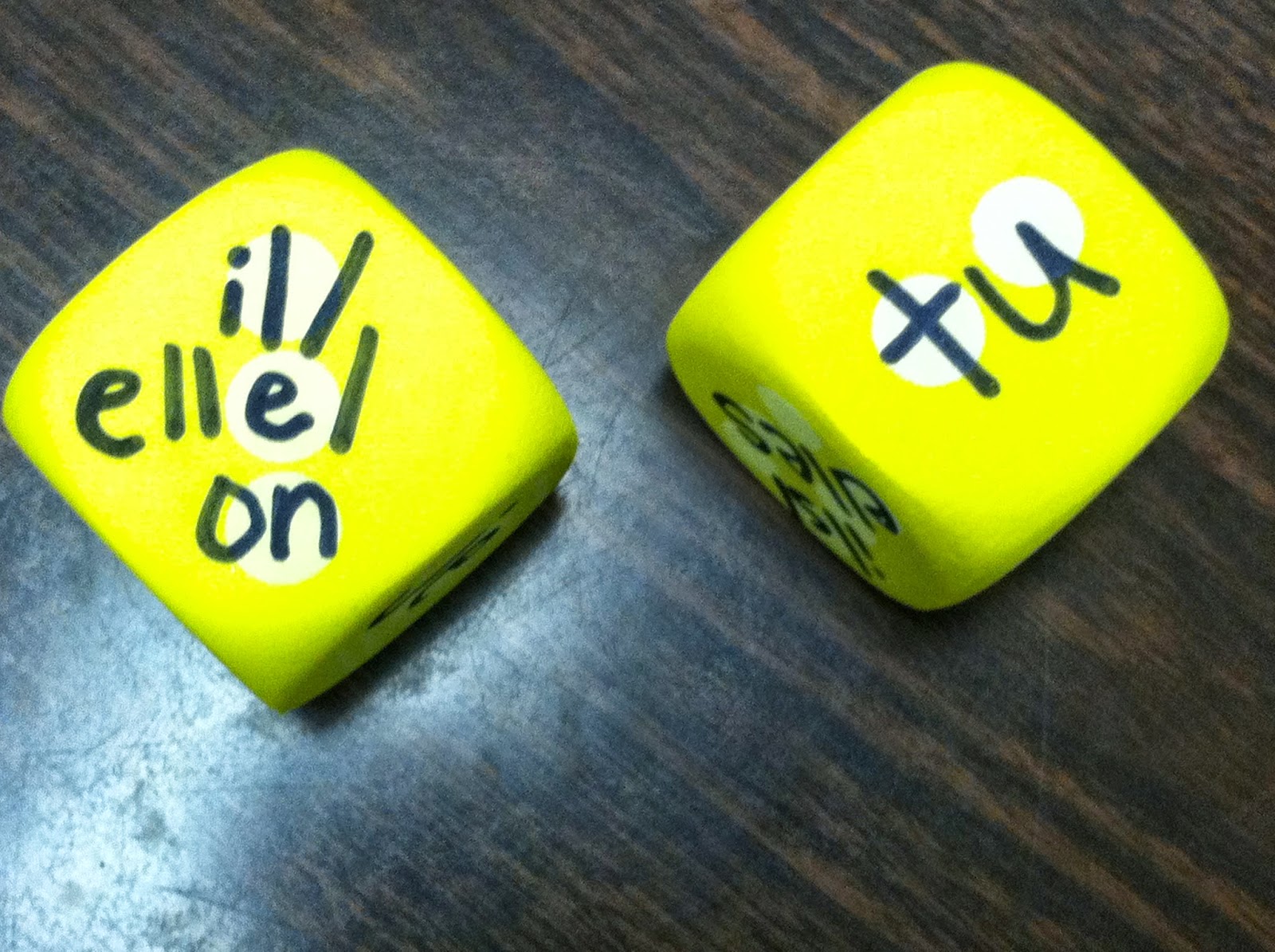 6. The team that won the round recorded the corresponding number of points: je-1, tu-2, etc...
7. EVERY student writes a sentence using the subject and verb from that round, along with a logical object of their choice.
What went well- engagement.  The kids were focused and trying to guess the verb as well as doing a good job recording what they needed to build sentences and using old vocab to finish them off with logical objects. Varying the point value based on the roll was a fun way to keep things lively, especially since I seemed to have more of my strong kids on one team.

What needs improvement- clarity of instructions. For the written portion, I had many kids write me "sentences" in which the verb wasn't conjugated at all.  I assume my instructions were poor and I'll revisit this tomorrow.  I also know my kids are just still feeling new to the idea of conjugating verbs, even though they think that's all we do, so some of them may just be generally confused about how to conjugate these particular verbs.  We'll see tomorrow.

Thanks for stopping by.  Math teachers, have you ever used Pictionary in your classroom?  (I used to use it every year in Geometry near the final exam because we had 300 vocabulary terms.)  Language teachers, what other games and activities would you suggest for conjugation?

Mathematically and linguistically yours,
Miss B
Posted by Kathryn at 7:20 PM 1 comment: